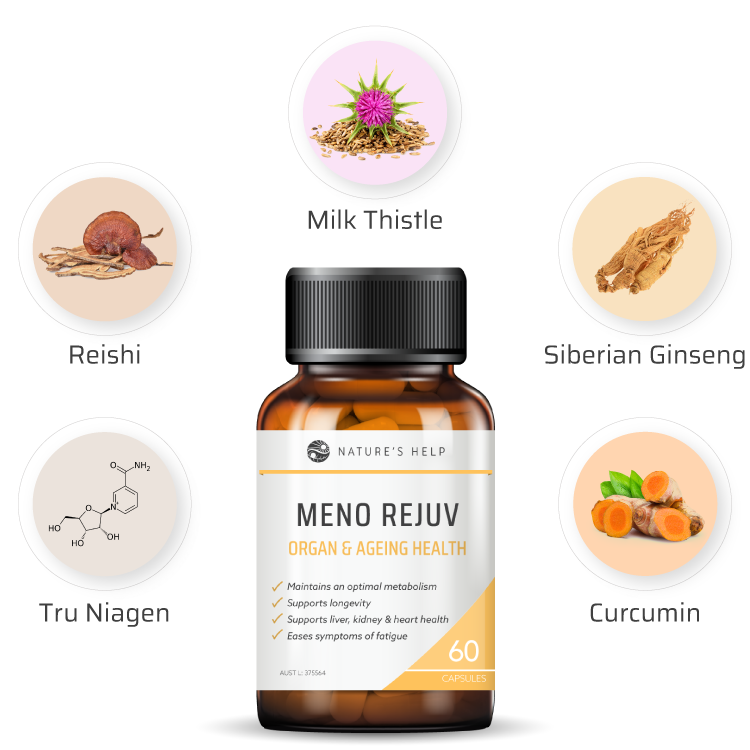 WHAT'S IN IT AND WHAT DOES IT DO?

TruNiagen aka Nicotinamide Riboside Chloride. What??? Trust me, now that you have seen it and heard it you will see it everywhere, even if you can’t pronounce it. It’s the most exciting thing to this market space since Benjamin Button. Sarah Berry, lifestyle and health writer at the Sydney Morning Herald and The Age, titled her piece on it “Could the ‘fountain of youth’ molecule reverse your ageing”. But what does it do? It raises the levels of NAD+, coenzymes found in all living cells. See below for more info.

Coenzyme Q10 is most commonly used for its cardio health benefits. It’s also popular for reducing the occurrence of mild migraines and is a powerful antioxidant that protects all tissues, especially the energy-producing mitochondria inside cells. Cool, isn’t it?

Reishi is traditionally used in Chinese medicine as a longevity tonic and for boosting your qi. A popular immune tonic and often used for symptoms on fatigue, low vitality and to support mental well-being.

Milk thistle is a liver and gallbladder tonic used to protect the liver and enhance its function. High in antioxidants, it works as a natural detoxifier and also promotes kidney health.

Siberian Ginseng is used to prevent colds and flu. In Western herbal tradition it was used to increase energy, longevity and vitality. We use it today because of its ability to improve cognitive function and to relieve symptoms of fatigue, weakness and exhaustion.

Curcumin is the active component in Turmeric and has antioxidant, antimicrobial and anti-inflammatory properties. It also reduces free radicals formed in the body and supports healthy digestive function. 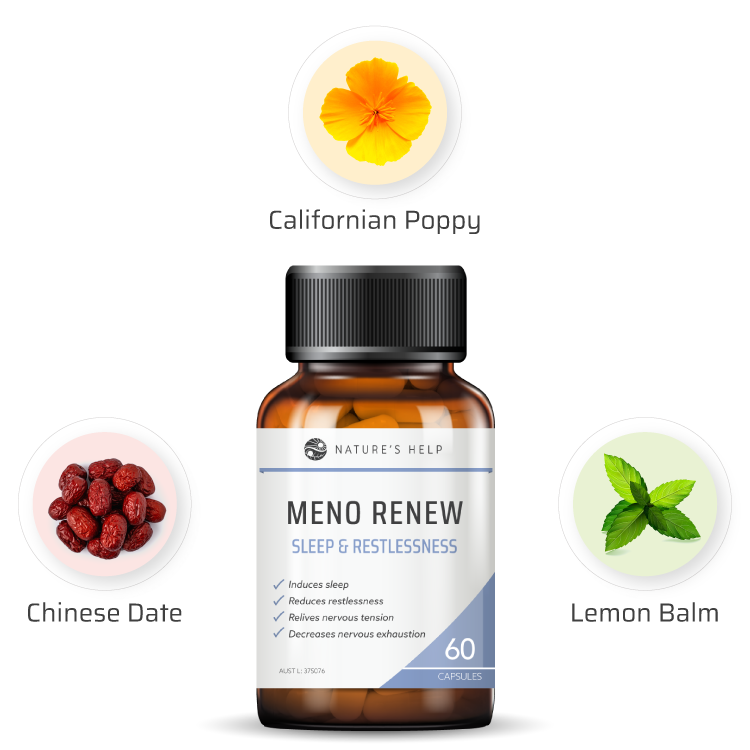 WHAT'S IN IT AND WHAT DOES IT DO?

Chinese Dates have been cultivated for more than 4000 years, for use in herbal formulas to tonify the Qi of the body. In Chinese medicine it is used to calm the mind and relieve mental tension.

Lemon Balm is a traditional European remedy used as a sleep aid and a digestive tonic.

Our hero ingredient in Meno Rejuv is TruNiagen aka Nicotinamide riboside chloride raises the levels of NAD+ in the cells. NAD is a crucial enzyme that regulates energy and metabolism.

NAD+ acts as fuel for many key biological processes, such as:

Low NAD+ levels have been linked to health concerns like declining metabolic function so having a supplement that raises those declining levels is… Eureka! If you are still not sure what it does, Google it! You can also view the full list of Meno Rejuv ingredients and benefits.

Our hero ingredient in Meno Renew is Lemon Balm, a herb from the mint family. It’s believed to treat a range of medical disorders affecting the digestive tract and nervous system, and its uses date back to 14th century Europe. Insomnia and anxiety are common features of menopause. It’s not hard to see the connection. Lack of sleep for a prolonged period will bring out the green-eyed monster in any of us.

Another interesting fact about Lemon Balm is that it’s also used to help memory and mental clarity. Of course, improved sleep will help mental function all by itself! You can view the full list of Meno Renew ingredients and benefits .

We formulated Meno Rejuv to help organ and ageing health, and Meno Renew to address the insomnia and restlessness associated with menopause. Put them together and you’ve got a dynamic duo tag-teaming it to kickstart your digestion, boost energy levels and improve sleep. You want to feel revitalised from the inside out - that starts with a good night’s sleep, followed quickly by a healthy metabolism.

As we get older everything seems to take longer – falling asleep, digesting a meal, getting better after the illness. We decided to do away with all that tediousness by creating this fun pack which boasts some great hero ingredients – they won’t exactly give you the fountain of youth but they will help your body put up a retaining wall against the king tides of ageing.

WHY WOMEN TRUST NATURE'S HELP OVER OTHER BRANDS 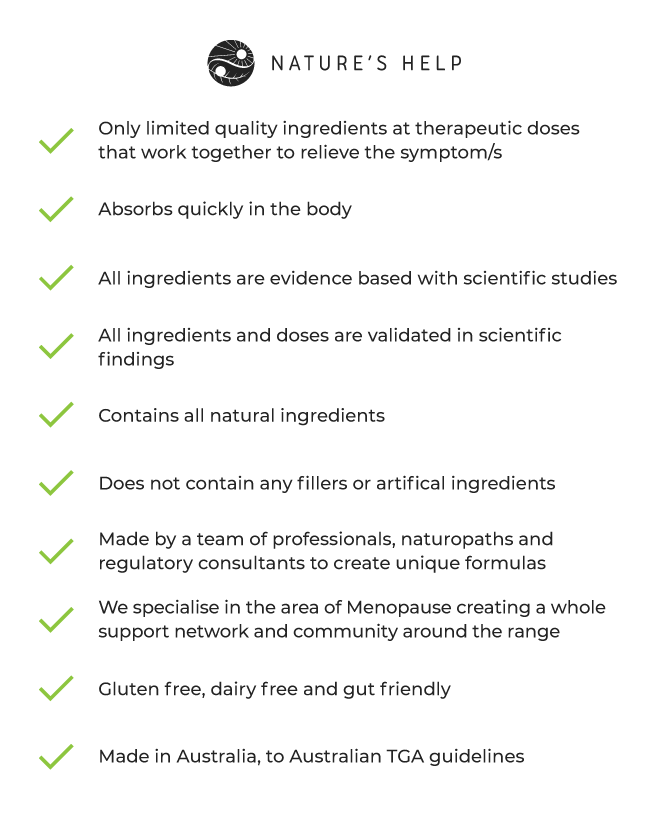 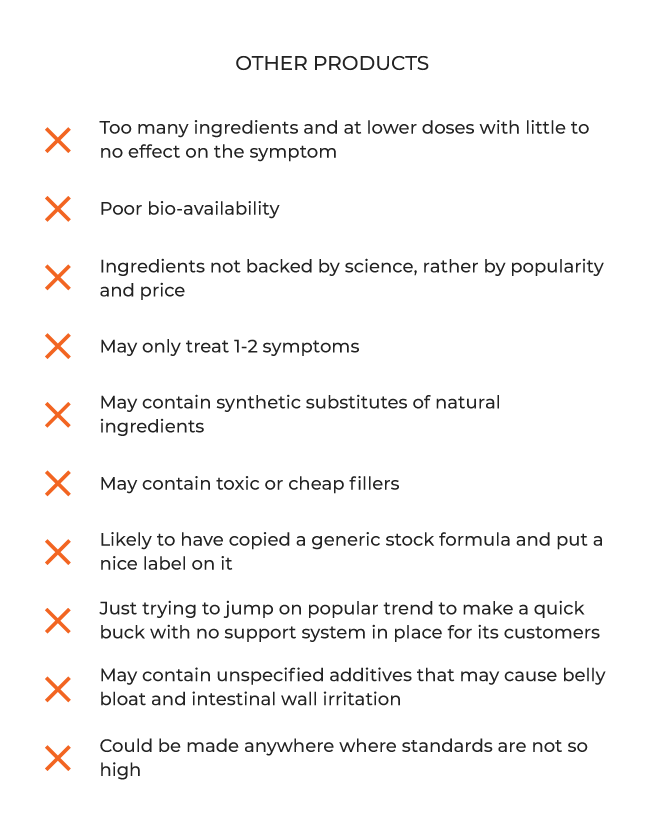 Meno Rejuv
Ladies take 2 capsules in the morning with water either with food or on a full stomach.

Meno Renew
Ladies, take 2 tablets with water daily, in the evening or with the evening meal. We advise you consume all our supplements with food or on a full stomach.

Menu Rejuv
Not to be taken by children under 12 years old.
Not recommended for use during pregnancy or lactation.
Do not take while on warfarin therapy without medical advice.
Please read the warnings before purchase. Always read the label before consumption. Follow the directions for use. If symptoms persist, talk to your health professional.
Do not use if cap seal is broken.
Store below 25°C in a cool, dry place.

Meno Renew:
Please read the warnings before purchase. Always read the label before consumption. Follow the directions for use. If symptoms persist, talk to your health professional.
Do not use if cap seal is broken.
Store below 25°C in a cool, dry place.